Hey my fellow PS Vita owners. I know we have been in a drought for a minute. I know the latest patch that allow us to play PS One games allowed us to play Final Fantasy 7. I stumbled upon this PS Vita exclusive game. I saw tons of reviews for this game and thought meh… Tons of tolls bashing the PS Vita with some solid real reviews. At the time I didn’t pick it up because I was not impress with the demo.

DO NOT TRUST THE DEMO!! The game plays much better and feels less boxed in. This game remind me of Infamous. An open end world where you try to gain the popularity of people of Hekseville. You play as Kat that can manipulate gravity. Trust me it is pretty weird at first. If you played Portal then you will be fine but for those who never touched that game enjoy the ride. 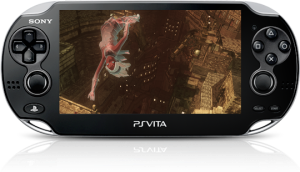 This game is fun. As a PS Vita owner I know the amount of GOOD games is FAR IN BETWEEN but this is a diamond in the rough. So there is some combat in the game. That is where things get a little different. First of all there is no lock on. So when you initiate the gravity mode you have to line up the reticule at the enemy core to do a flying gravity kick. Best believe if that enemy move you have to pause in mid air and line up again. I know. Epic Fail. But once you get the hang of the gravity flying you be pulling U-turns in mid flight like a boss. Now the enemies you be fighting are called the Nevi. They pop up from time to time to break you out of the sweet flying around you can be doing. Trust me I spend most of my time floating around collecting orbs.

The graphics look clean. The sound is spot on. For a handheld game this is great. I know most sites like Gamespot gave it a 6.5. I read her review and was sad to see that she missed the point of the game. It is an original title. This reminded me of the days of Nintendo when classics were born. Such as Donkey Kong and Mario. Kat is like a new iconic character for me. I never played a game like this before. The comic book style narration is superb. Sometimes you can tilt the PS Vita and get a 3D perspective on it. The PS Vita isn’t doing well in sales I know. But thank God for great games like this that can keep me busy in the bank line. Also there is DLC to extend the replay value. So if you are like me and sometimes want to play a game that isn’t something you played before. Try Gravity Rush. THIS IS A GREAT GAME. I recommend this game and know you will have fun playing this game. It cost $36 in the PSN store and about $40 for the game disk. It isn’t to expensive and really do have a great story. If you enjoy open end world games this game is right up your alley.