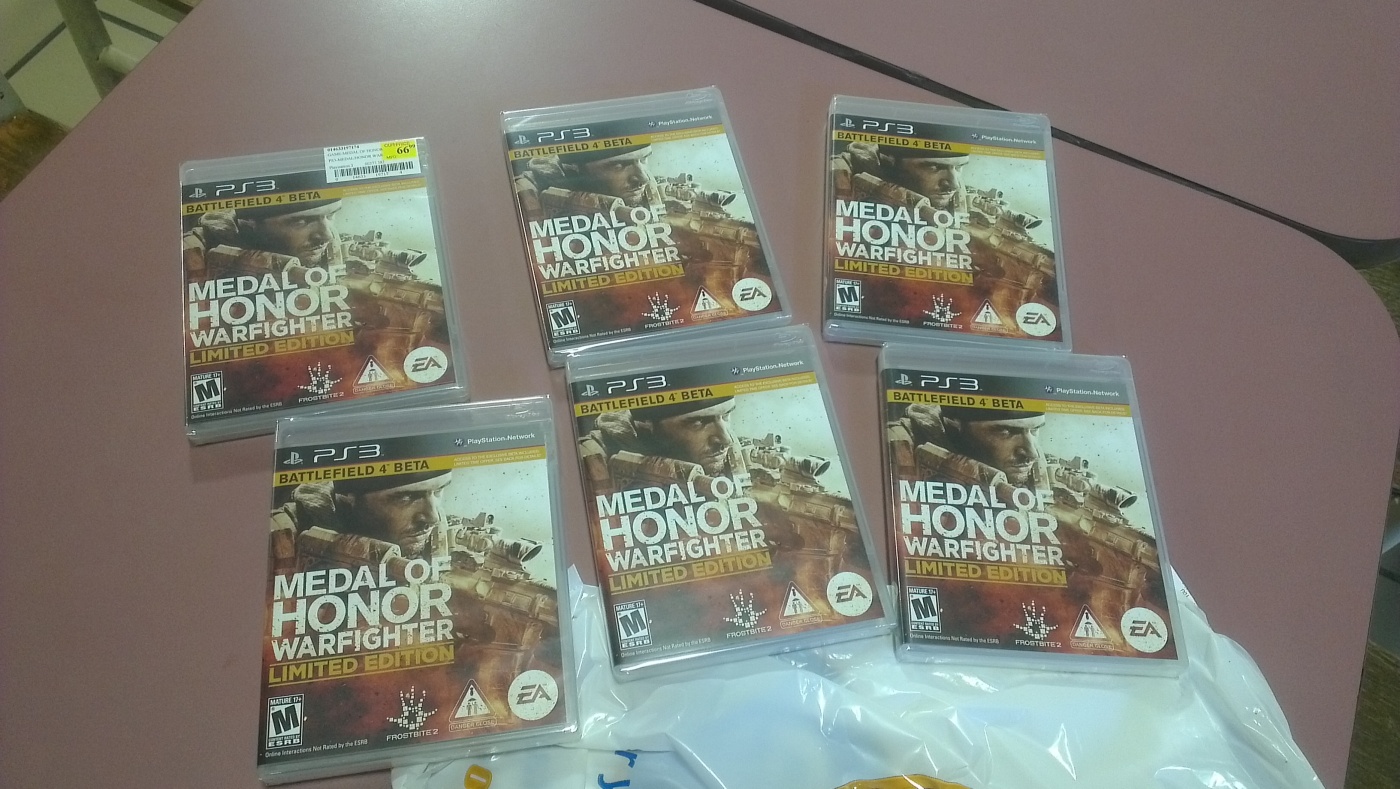 The mission was to get 6 copies of Medal of Honor: Warfighter for the HTKU clan. Now if you live in the BVI you would know that we don’t have a store that would allow us to have the game as it drop. So we planned the mission. We got the pre-order in St. Thomas @ FYE. Then on October 22nd I began my mission. I slept over by my Aunt. My cousin was the driver. Money collected I was ready to complete the mission.

Unfortunately the mall was not open as yet. So I waited for about an Hour to receive our Limited edition copy of Medal of Honor. Now I was the first one there. The owner looked at me and asked me how he can help me. I told him I came for my reserve copy of Medal of Honor. He then asked for the name. I gave him the name and his eyes opened wide when he saw how much copies I needed. He said that in all the years he worked at FYE in St. Thomas he never saw one person ordered that much copies of one game. Imagine not every clan member made the order. Originally it was 9 copies. Brought it down to 6 was just because. So as I made the purchase I made my exit to the boat. Not going to the store to buy anything else I was a man on a mission. Holding my bag tightly I knew that many reviews of this game that I travelled by sea for would get much heat. Being put up against big titles such as Halo 4 and Call of Duty Black Ops 2 was a tough one to beat. But I really feel that this game is for those gamers who want something different. Who want to play a game that have the customization of Black Ops and the depth of BF3. I don’t know what this game holds for me but I know one thing for sure. There are at least 6 people in the British Virgin Islands that have it on the day of release. Isn’t that what gaming is all about. To play your favorite game with your friends. To have the rush of a new game in your console. To experience the joy of learning a new game. So as I sat in the boat all I could of thought about was “will this game be any good?” The other thought I had was “who else bought this game?” The thing that make or break a game is support. Will Danger Close support this game. Will they listen to the community of gamers. Will they continue to make this game excellent. Will they have maps and extra guns. All these things can make a game either great or an epic fail. Games that I thought had potential was Killzone 3. They had a great feeling to it at first then they brought out a patch making it feel more like Call of Duty. Epic Fail. The thing they did wrong was fold under pressure and not listened to their core fans. Sometimes trying to satisfy everyone isn’t the thing to do. So with this game I am gonna go home and enjoy this new entry to the FPS community. Keep it locked here for the review very soon.