I love the smell of a new Naruto Episode in the morning. This one is a continuation of the Power Episodes. So lets get into it.

This episode was not only interesting but got my spidey sense tingling. First off it picked up right where I wanted it to begin. Naruto being pulled under by the huge snake. He used his shadow clone jutsu to multiply inside the snake stomach then rushed up to the surface. Now while he is swimming frantically to the top he digested some of the water. Just then Kabuto sense that his “babies” found a new home. Inside Naruto. Then he also realized what Naruto limit is. I guess he need him to dive for him or something. So what I liked about this part of the animation was it looked like they added some CG snakes. Look like Naruto getting some digital love. 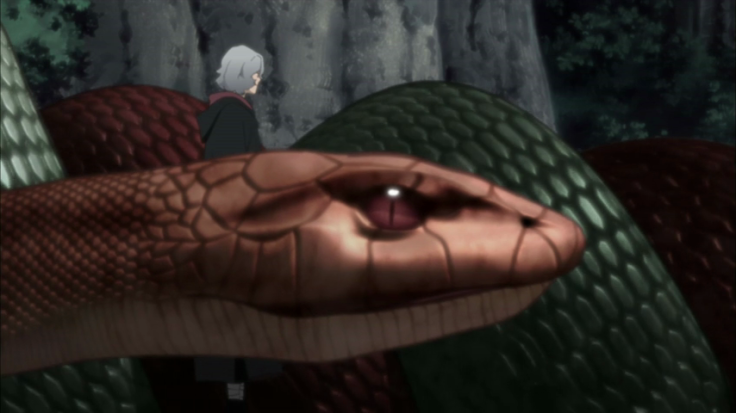 So after he got the data he needed as usual he ran away. For once I would love to see them just kill this dude. But that can never happen. Well not yet. So after that fight they realized what they are up against and started to do some homework. Now there is a part where they explain the back story behind the Teddy Bear Sensei and the sexy ninja lady. I mean she look nice even with the scars. Totally loved the bath scene with the ladies. What was very interesting is that everytime Naruto either dose off or slept he saw snakes invading his body. Also we see that the little girl is psychic. She displayed this power when Naruto went to shake her hand. She saw a snake jumping out at her. Also I think she is linked to the Evil that is in the lake somehow. Another interesting thing that had me geeking out was the epic messenger app on the scroll Kabato was using. Looked like Kabato was using Facetime on his iScroll. I think he was talking to “Tobi” aka Obito.

Another great episode for this series. I am totally geeking out for the next episode where see that the invasion in Naruto body will manifest itself and cause some serious problems for his friends. Even showed us the little girl telling the snakes to come out. I mean Naruto already got the Nine tails in there. Poor boy is like a walking hotel for stuff lol. So till the next time stay frosty!