One phrase comes to mind when I watched this episode. “Like a Boss.” Yeah I know I been AFK for a hot minute but I am back. So the Chikara (Power) Episodes was the best fluff I have ever seen in a long time. Especially the last episode. It was a bit on the soft side but I loved every second of it. Ao we come to the meat of the main arc. The moment we been waiting since the first Chikara episode. Naruto and Killer Bee have joined the fight. 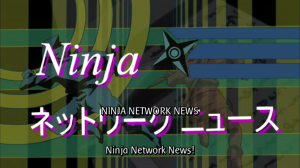 So the coolest thing they did was give us this Ninja Network thing similar to a news network. Bringing us up to speed so far in this epic battle. I especially loved the part with Sakura getting all crazy about her secret lover. I hope she done with this infatuation with the douche bag Sasuke. We done know Naruto gonna be with Hinata. Well I hope.

So after watching Sakura destroy a desk because they asked her about her love life was funny. We come to the real issue at hand. The white Zetsu. These guys are able to take the form of their comrades and kill within the camp. Carrying the same chakra signature and everything. Fooling even the elite ninjas. Not to mention the resurrected ninjas that in my opinion just to legit to quit. 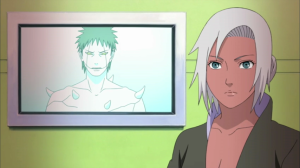 So the fight is getting fierce. Who you gonna call. Naruto of course. Which was what I been waiting for. So lets get into to it. This episode action did not fail one bit. I was literally drooling over the amount of moves this man learned with Killer Bee.

What can I say. Naruto came back with a vengeance. Naruto can sense the white zetsu easily. Not only that he decided to fight everywhere at once. You ask how can one man be at everyplace at once. Shadow Clone Jutsu of course. Which brings us to another point of the battlefield. Where an army is being chased down by just 4 guys. Which speaks leaps and bounds about them. These 4 resurrected ninjas seem to be the baddest thing since Tu-pac.

Now I know so much things happened in this episode that it would take a hot minute to write it all. The most important thing that I want to point out is the smallest one to the right is Gaara’s father. He uses Gold dust. Pretty cool if you ask me. So it nullifies Gaara’s dust and make daddy seem even cooler. I already see that there will be alot of talking in the next episode between those two. Expect lots of crying and flash backs. I hope they don’t prove me right. So I know I been slacking off but since I got back from CES I had to handle some official business. Since that is done with time to get back to my second love. Anime and gaming!!! So stay frosty and hello internet. Did ya miss me!!