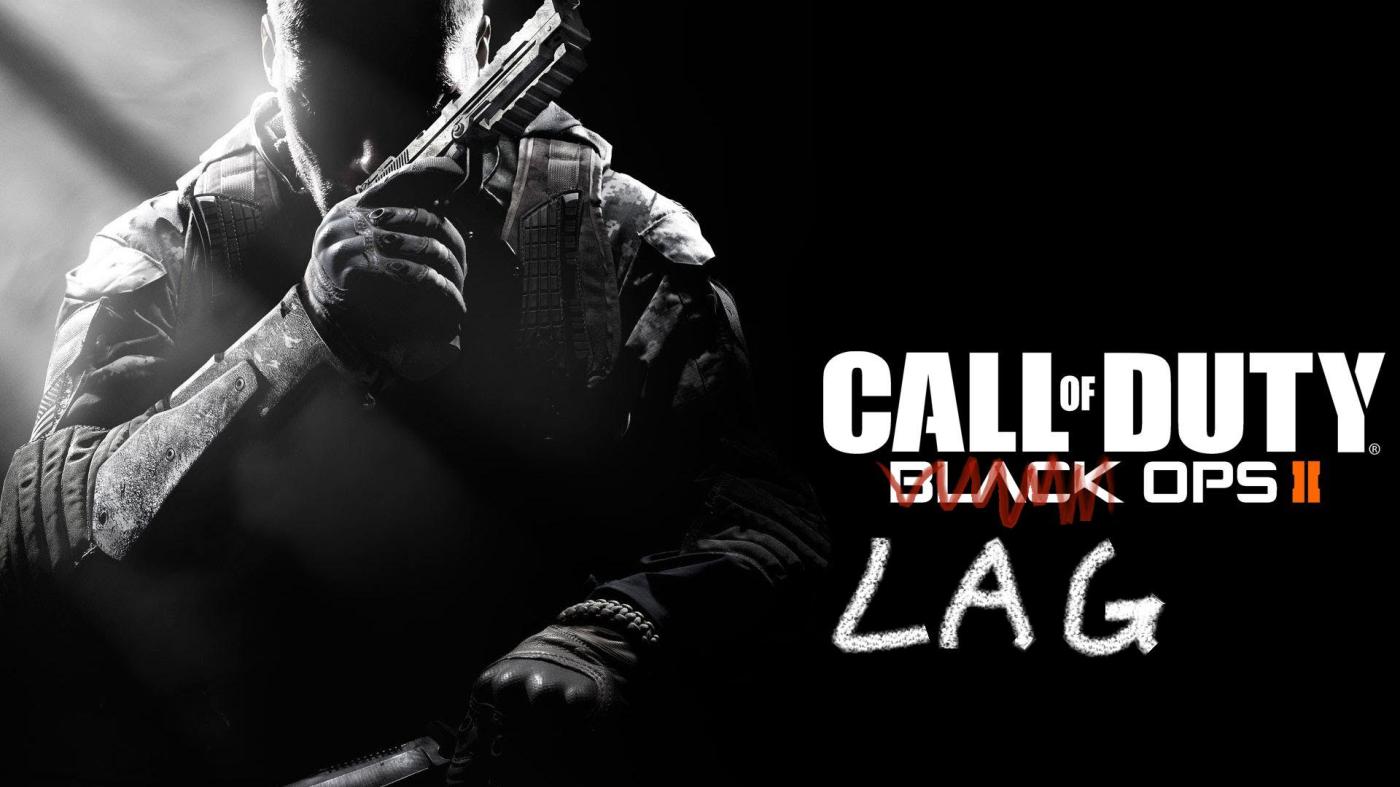 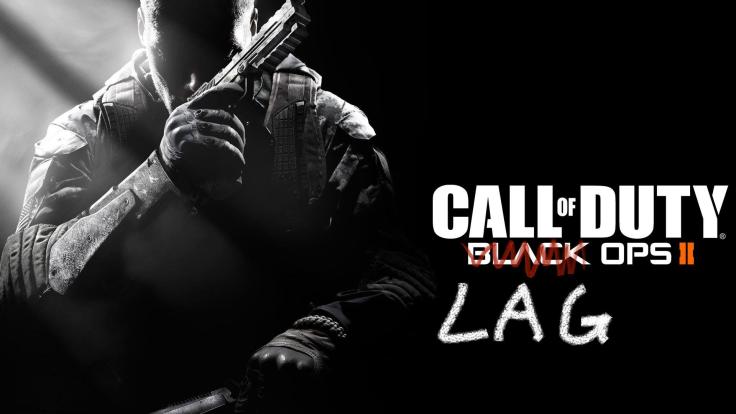 Preparing for the VXG games 2013 in July and one of the games that HTKU is playing is Call of Duty Black Ops 2. Now we all know after Modern Warfare 3 that basically the COD series was complete trash by then. Now don’t all attack me at once. Just sit back and let me explain to you why I hate Black ops 2.

1. The number one reason why I hate Black Ops 2 is Lag.

We all had that moment. We are looking at the guy in front of us and just when you think you have him you drop. You shrug it off and think maybe your internet just had a memory laps. Then it happened again. Then again. Then suddenly you think to your self… Can it be the game. Then you decide to think not. That is when the rage kicks in high gear. Why? Cause you have a shotgun and at point blank you shoot first and die. Just to see the guy dancing on top of you because on his screen you was picking your nose and looking at the sky for no reason!! Which brings me to the Lag compensation. Long story short it trys to help bring equality to the players by giving the host of the match an even plane with people with bad internet. It sounds good on paper but what it really does is give the host god like powers. Bullets bend beyond corners and leave dead bodies behind. This is only amplified for the gamers in the Caribbean. We have the privilege and honour of getting both Lag compensation and crappy internet. You put those two together and you have rage fits like this: WARNING FOUL LANGUAGE AND GAMER RAGE AHEAD

Poncheezy Cottoy Ain make no sense I play cod no more mehson. Especially on this bullshit network. To hell wit this LIME BVI bullshit! Yea. Is u I talkin to. Wa the fuck paying $100 for. If I can’t even have a decent experience online. And I don’t have no more money to give them just so they can open up some whack ass bottleneck, Like dem gah me in ah friggin figure 4 leg lock. I never been more pissed mehson. I goin find ah new friggin hobby. This y I hate living the bvi. We got the worst of everything but paying… as if is the best. Fuck this shit. Nobody ain goin do jack shit bout it either.. chupes. Leh me know when cable tv launch broad band in the bvi mehson. I goin in tomorrow to terminate my lime service.. at least thas the way I feel right now. I can’t take it no more dehman.. This shit ain friggin funny no more mehn.

LOL that was epic. My boy just lost it after a game of Black Ops 2. On to my next point.

2. The next one on the list is Hit Markers.

This is my favorite. Nothing is better than blazing bullets can’t done on a man and seeing the infamous hit markers and just when you loaded your second clip he turns around and shoot you with one bullet. You die and he lives. The hit marker is what lets you know as the gamer that you have hit your target and he is suppose to be dead because of this. But not in Call of Duty Black Ops 2. Oh this great and wonderful game likes to keep you guessing. Did you really killed him or is he using the all powerful host powers. Then as you decide to keep walking he magically kills you behind a wall. Which brings me to my next point.

3. The amount of Campers in this game 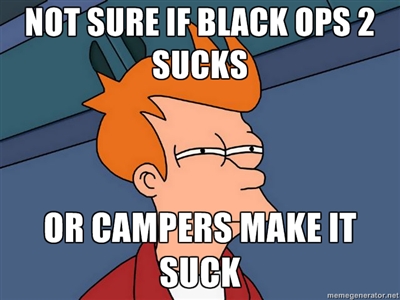 I am gonna elaborate how bad this game is with campers. It is so bad that there are guides teaching pathetic noobs on how to be campers. I call it camper pro perks. These fools sit down and wait for you the run and gun type player who is basically playing the game as how it should be to pass by and shoot at you. Now some would argue and say that it is a playing style so get use to it. I have this to say to you stop being a dick and play the game! Cause most people who say that are campers. Most other people who say that don’t play FPS. They usually like playing with themselves. 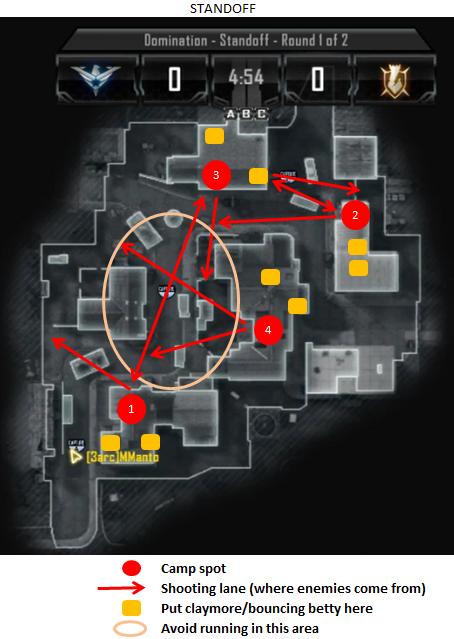 This is just one of the many guides you can find on the internet by just typing Black Ops 2. I mean it so crazy Google finished typing it for me and it seem many BLOPS 2 players search for this. I play only hardcore mode and trust me they be sitting down and roasting marshmallows with their buddies and giving each other digital cock in a corner. It is ridiculous! You are probably thinking I must of gotten my feelings hurt by a camper and wanted to vent on my blog. To be honest I am not mad. I am furious!! These fools take the fun our of FPS and piss all over it. I take joy in killing these fools. Can this be done in Battlefield 3? NEVER! That is why God bless BF3 and cursed COD. Amen. I almost feel like starting a petition for banning campers. Let me go to my next point..

4. Spawn boosters and the Spawn system 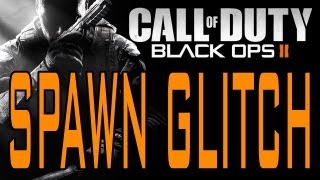 This one here just rides me the wrong way. Your in a game and all of a sudden as you spawn you die. Then you think stupid game started me right next to the enemy! You spawn again just to find another douche bag waiting to spawn kill you. Then you find out that they are tricking the system to make it happen that you are spawning where they want you. They strategically position themselves at certain points on the map to force you to spawn at a certain point. Thus raping you everytime you spawn. Now this doesn’t work all the time but when it does. Prepare to destroy your controller.

As you can see here they basically know where to go and what to do. They even figured out how to glitch at certain points. This is something that I think they are currently trying to fix with a patch. Personally I think the whole game needs a patch. My last point.

Any Gamer knows for years Microsoft been paying off Activision for exclusive rights to the Call of Duty franchise. What we also know is that it plays much better on the Xbox 360. So why am I mad about that. ALL MY FRIENDS PLAY ON THE PS3!!! So I get to play this crap of a game with all the stupid glitches and horrible issues that plague the PS3. The beat doesn’t stop there. Coming in November is Call of Duty Ghosts. So we done know what platform that will play best on. I mean it sucks but what are you gonna do. Most gamers I know own both PS3 and Xbox 360. Sadly the ones I know only play on the PS3. They don’t have enough money to pay M$oft every year for the Gold membership.

So there you have it. The top 5 reasons why I hate Black Ops 2. Sadly there is a new map pack coming out that I have to get. Why because I want to win that competition and win that prize money. It is a dirty job but somebody got to do it!