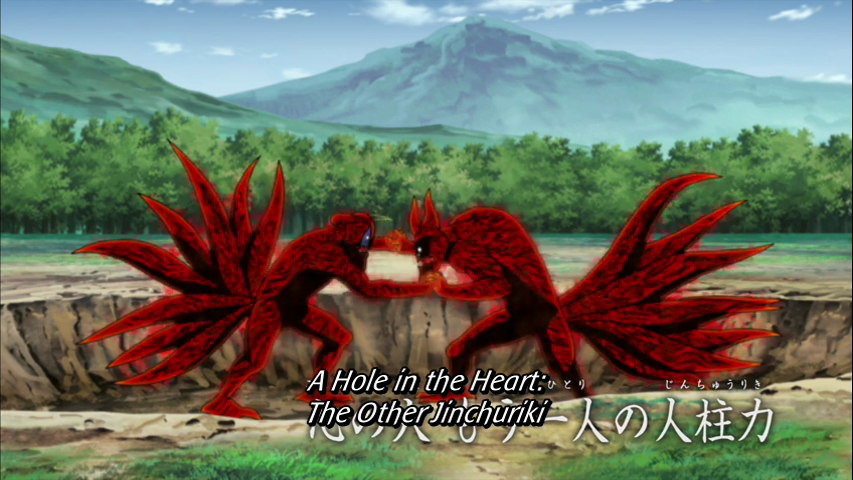 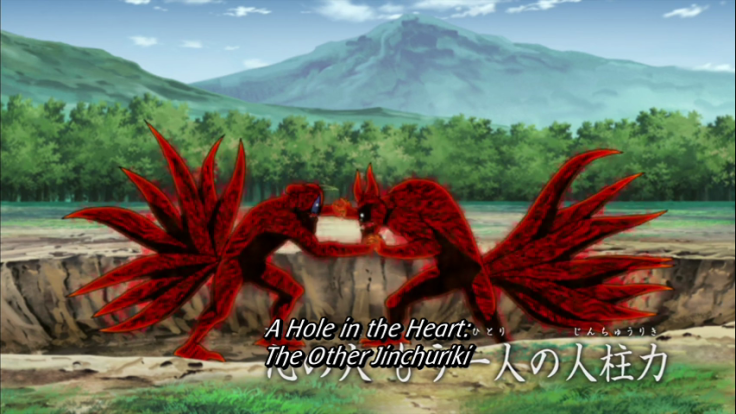 Now this is not a fluff episode. Well I think it isn’t. It picks up where Bee finished taking a piss. Now that was one long piss if you ask me. Felt like eternity. Nonetheless this episode revealed that Orochimaru got more tricks than the average bear. Look like he handed all those tricks to his sidekick boo boo.

Killer Bee jaw nearly fell off when he saw this dude. No one expected him to be here. I mean Kabuto was going hard in that grave robbing. So when he showed up old feelings rose up. Which brings up the title of this episode. Hole in the Heart. Which in my opinion shows the burden of being a Jinchuriki. The loneliness and darkness could make any sane man take his own life. That was his burden. Took it to his grave. So what was the big deal of bringing Fukai back. Well only this:

Only in the narutoverse can this happen. How is this possible? How come the eight tails don’t remember how Fukai died? All these answers after the flash back!

So let us start with how the eight tails reanimation is possible. Well Orochimaru being the mad scientist that he is took the cells from the missing horn from the eight tails. Yeah you know the one that he is missing. The next question is how did he get that horn. Ah yes that web was woven a long time ago.

So we start with Fukai having a hard time sleeping. Telling his very sad story to his only friend. Then fast forwarding ahead we have Fukai going to the doctor. But wait the Doctor is really……..Orochimaru!

So after slipping Fukai genjutsu pills he was an easy target. Which is why the eight tails couldn’t remember what happened. So after a flash back of the eight tails rampaging and having his horn cut off the sneaky Orochimaru scaled off some of the cells very quickly. So with all the questions answered we move on to the present day. Big man fight. Two eight tails going at it. We done know how this gonna go down. With the title telling me already something touching is about to happen. That hole is gonna be filled with answers. So how does this happen.

So to wrap things up we get a very touching moment between two Jinchuriki. Killer Bee revealed to him what his special thing is. What keeps the demons away. Just like that we have the end of this episode that isn’t really a fluff but kind of a main arc. I don’t know what to call it. So if you are waiting for the main arc I think this is as close as we gonna get for now. I am not sure when that will happen but fingers crossed it will be sometime soon. There was many other cool things in this episode that is worth checking out. I just jumped around the main parts but it is worth checking out. So till the next episode stay frosty!