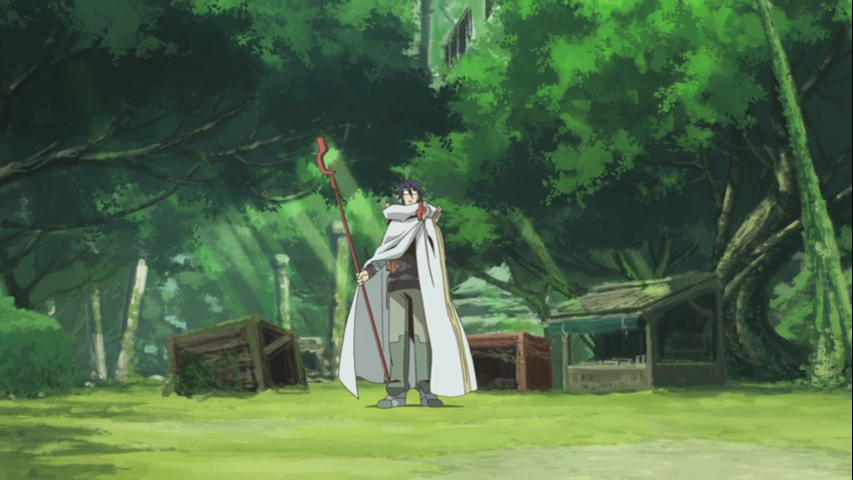 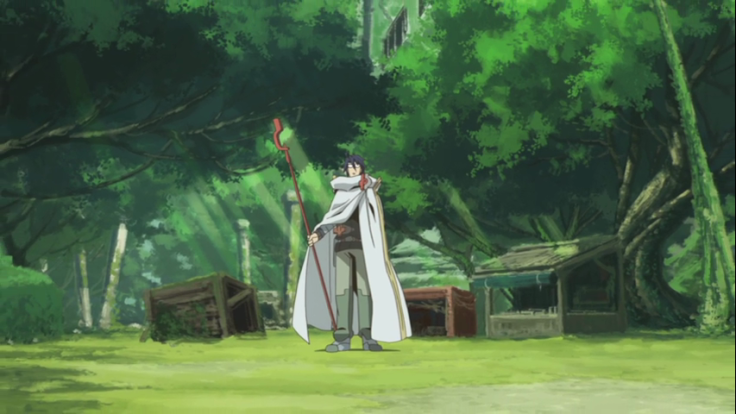 YES YES YES!!!!! I am totally geeking out right now. Why? Since Sword Art Online I always wanted to see another show with the same idea. Being stuck in a MMO. I loved Sword Art Online. I mean I hated how it ended but I really wish they added a little bit more flesh to that series. So I googled like mad for a show similar to it. Came up empty until last month.

Log Horizon is about players in the real world being stuck in a game. Not just any game but an MMO. YES!! I never felt this good about a series since the last episode of Attack Titan. ( Yes I watched that series and really got a bunch to say about that! ) The main character of this series is a strategist named Shiroe. I already loved the fact he isn’t a sword wielding hero type character. He is a support character. A level 90 Enchanter.

So lets dig in the episode. So we know they setting up the foundation. Getting to know the world they are in. Elder Tales. Some other info you can check out in the episode but let me tell you the tone of this anime. FUN AND SERIOUS. That is how I like my anime. The characters are not as serious as the Sword Art Online guys. The tone is much lighter. Which in my opinion makes it more likeable. For example the other character is a level 90 Guardian.

This man is awesome!! He reminds me of Stiffler from the movie series American Pie. You can tell he is full of jokes but ain’t no joke when it comes to handling that sword and shield. You can also pull from the relationship that they are friends online but never met offline. That is the story of my life. Tons of online friends but very few offline friends. You can also tell that Shiroe didn’t use his real world details for his online avatar. Always tripping up and stuff. Which tells me he his much shorter in real life. Probably a young teen. Well we know Naotsugu used his real details. So we have an open pervert and a very shy young teen paired up in a virtual world that they can’t come offline. Perfect. I won’t lie sometimes while playing Final Fantasy 14 online I wonder how it would be being stuck in that world…Probably would suck.

So you know an anime wouldn’t be complete unless you have “the girl” in it. You know the uncomfortable love hate relationship. The kind that you know he likes her but never say anything. The kind of relationship that only anime can do. So who is this girl. Well she wasn’t a “she” at first. I know don’t worry it isn’t any sex change operation here. You are in a MMO. We drink potions. Like duh.

I love this chick. Not because she is an awesome assassin. Because she is funny as hell. I mean from the time she flipped the script and changed from being a man to a woman I knew this was gonna be funny. We done see Shiroe done fall in love. I take it that she and him are the same age and height. So you done know he thinking….cyber sex lol. There was a point in the episode where she does something. Made me laugh literally. If you watched it you know which part I am talking about.

The greatest question that I had on my mind when I was watching this. If they are in this world. How do they eat? Also if they did what would be the outcome of it. Cause we all know humans need nourishment. They also have other business to attend.

That alone told me the way this anime was going. They had humor but still was serious about the situation at hand. The first episode gave me a great idea of what is to come. Watching how they got together and started a bond that we know will be tested with many trails and tribulations. Also so far there seem to be no end game. The idea is to survive. My question is can they respawn? I hope so. Wouldn’t want the whole if they die in that world they die in real life be the “thing”. That would suck. Cause then the light happy go lucky theme would be dark and serious. Well I doubt they would copy Sword Art Online. So far they are going the best route. Good action with jokes. Talking about action I didn’t talk about that. So let me just touch on that before I end this review.

At the beginning of the anime we see how they got to that point. They wanted to test their strengths. As you know they used menus to execute moves. Now things are a reality for them. Watching the action made me really think back on Sword Art Online. I know you hear me comparing it with that anime a lot but it is hard not to. They are very similar. The greatest difference is that this one the main hero isn’t some special exception. He uses his brain that his abilities. Which can prove to be a very good thing. To often we have the hero with a niche. Here we have someone who seem normal. The action was good. I can expect much more great episodes coming our way. I will be definitely following this series very closely. So if you want to watch a new anime that is funny and still got enough action to keep your pupils dilated give this one a shot. Log Horizon. Stay Frosty!