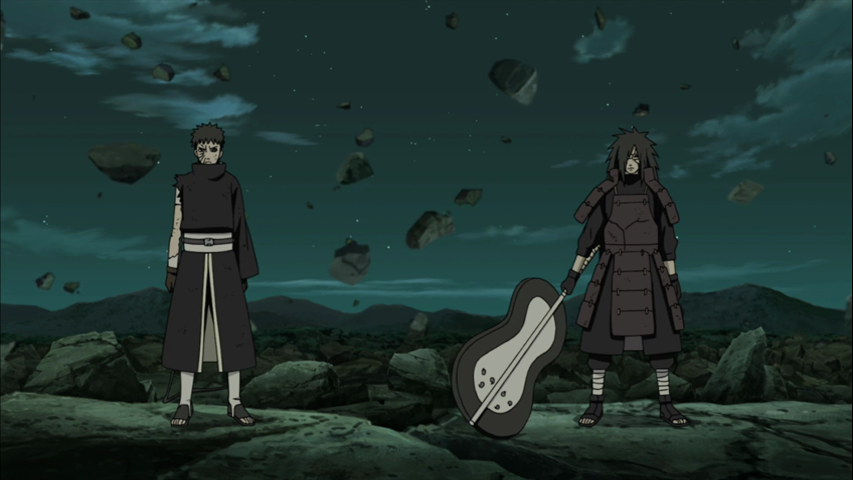 Happy Naruto Thursday. This episode packed a punch. I said it once I will say it again. That man name Madara is just to awesome. Can anyone stop him? Only man that can stop him is the First Hokage. But enough about him lets dig in. We have an angry Naruto san. Once he saw Madara in front of him he knew that the Kages was dead. Boy were they dead.

Even though half of her body was crushed she was still able to summon her healing leech. It seem that the Hokage aka Granny Tsunade is planning to bring them all back to life. She is one tough cookie to break. I expect that from the First Hokage’s grandchild.

Back to Obito. The man of the hour. All eyes are fixed on him. He is like Tupac right now. Dem boy look like they want to do a drive by on him. Kakashi look like he ain’t know what to do with himself. Confused on to why Obito is doing this and how did he linked up with Madara.

Well guess what folks you know what that means. Flashback time. We all knew that was coming. I will fast forward through the stuff we already seen and know and talk about after Obito got crushed by a boulder.

Madara used the cells of the first hokage to patch him up. Then started talking about “in this reality if there is a victor there is a loser” poppy cock talk. I mean seriously.

ACCEPT IT MADARA YOU GOT PWNED! Why must you be such a sore loser. Geez at least be a real Samurai and accept your defeat. Shoot you was suppose to commit seppuku. (Samurai committed seppuku for a number of reasons, in accordance with bushido, the samurai code of conduct. Motivations could include personal shame due to cowardice in battle, shame over a dishonest act, or loss of sponsorship from a daimyo. Often times samurai who were defeated but not killed in battle would be allowed to commit suicide in order to regain their honor.) I guess the Uchiha Clan is a bunch of proud ninjas. Can’t take defeat gracefully. Also before you start raging I know they are ninjas and not samurais but I still feel they need to follow some kind of code.

So anyhow Obito at that point and time wanted to be reunited with his friends who thought him for dead. I already know what will happen in the next episode. I can see it now. Obito somehow make it out and see his so call friends mourning his death. Then become enraged when Kakashi get some good old fashion loving from Rin. We all know Obito was pussy whipped from long. Big man done say if he can’t get none no one will. But that is for the next episode.

I am glad that Naruto is back. Even though during its absence I watched another series called Shigurui. That anime is no joke. Real talk thing had my mind warped for a good minute. Had to watch My little Ponies just to get the gruesome deaths out of my mind. Yeah I know.