They say Valentine’s Day is about love; and here on CG we love video games, anime and manga. To the uninitiated our fandom may come across as (slightly) overzealous. Since I’m one of you I wont judge so please tell me where your heart is in the comments.

To kick things off…and hopefully create a safe space…take a peep inside my ‘Then and Now’ fandom.

Vagabond is the first manga I recall getting hooked on and nearly a decade later the love affair continues. It’s an award-winning fictional retelling of the life of Japan’s “Sword Saint” and I think Inohue Takehiko breathes life into his tale with his artistic prowess. If you liked those flashbacks in Lost Odyssey you may want to check him out.

While I don’t recall what the first comic/graphic novel I ever read was, I do remember the first one I ever actively hunted down…Batman. For me there is no Batman or Superman debate because I’d personally build a Krytonite house in the middle of Metropolis.

These days I’m trying to familiarise myself with the New 52 origin lines and if you doubt my (mild) obsession – below is the reason my livingroom has black accents (cause I’m told women like to match things). 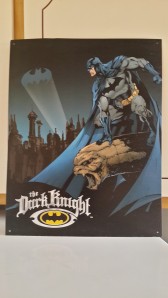 Then Dragon Ball. Do I even have to explain how this changed me? I was such a painfully shy introvert before this show and all of it’s lessons. In fact, the top 5 things that this franchise taught me (in no particular order) are:
1/ Meeting someone stronger is a good thing. It pushes you to be better than you were before.
2/ Good people need never fear death (especially if you have all 7 Dragon Balls).
3/ The Universe is filled with strong men…and they all love and fear their wives.
4/ Mentors are awesome!
5/ The things you love are worth fighting for.

These days I’ve been watching (and re-watching) anime based on manga I liked; from Attack on Titan to Future Diary (more on these in later posts). Of course my DBZ love still maintains and since creator Akira Toriyama took the time to get hands-on in making the 14th DBZ title (18th in the franchise), Battle of Gods, I finally got around to watching it thanks to the good people at Saiyan Planet and you can too at:

These days I play GT5 and I just started NeverWinter (because I honestly want to understand the D&D craze but don’t have time to learn the entire world).

How’d it all start? It started with board games and physical puzzles before I played Pong with deep fascination at the “technology”. To date the only dog I hate is that laughing dog in Duck Hunt…but Zelda was the first game I ever purchased and is probably still to blame for my love of Action Adventure titles (and puzzle indulgences).

Video Games on the whole is the reason why (I tell my mother) I’m not married. No…it’s not due to the lack of social skills or an addictive personality that uninformed society seems to think all gamers develop (or have to begin with); because we know that most…some…err…lots of gamers are awesome. However if you meet an unmarried girl-gamer, 99% of the time she’s not married because she lacks one thing…abduction.

Every good gamer knows that half of every happy couple needs to be lost so that the other can go on an epic quest to regain them and prove their love. Option two would be that they get murdered and you mourn them during rampage but that’s a dark and nonviable option (unless you have access to a set of Dragonballs).