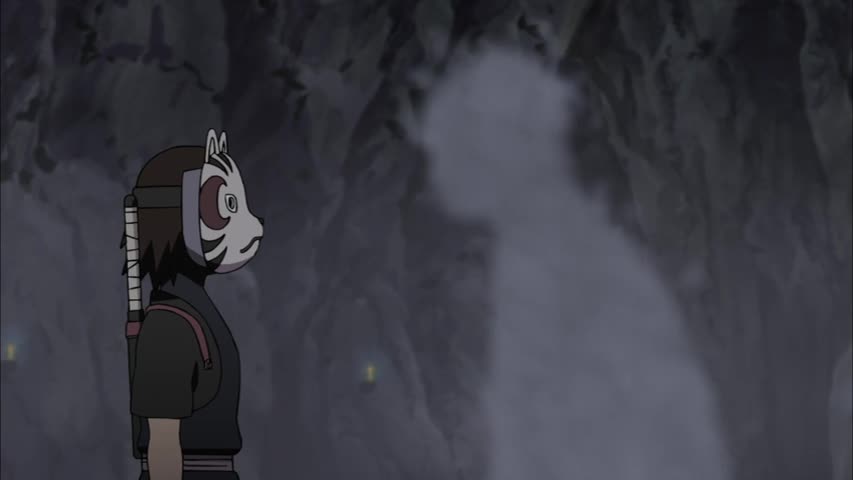 There is a natural mystic flowing through the air! Yes I! Dem man ain’t playing with this Naruto episode! Man getting high just watching the mystic man dem floating around! LOL I done start writing folly from just watching this very important back story episode. So pass the dutchie pon di left hand side!

So we have Danzo in panic mode. Like he didn’t see that coming. You know the Third ain’t playing around with Orochimaru. Sadly we all know how The third is one big softy. He talk the talk but can’t seal the deal. Which reminds me. What is up with Kakashi and Orochimaru eyes. It is like when he looked into it he was hypnotized..

Dude walk right past Kakashi. I guess he ain’t no match for Vybes Cartel Cousin. Either way even though the third wasn’t man enough to kill him he did inflict serious damage to him. I mean when I saw the snake slide down from the tree I thought to myself. This man got snakes all over the place.

So the man hunt begins. Most of the ANBU out looking for this man. Shouldn’t be long. He is injured and ain’t moving to fast.

Shifting gears we see Kinoe sent away to a secret hideout to wait for Orochimaru. This is when things got real. Kinoe was sent to a Rastaman village. Everyone there is smoke. Their body is smoke. Literally. They can’t go outside due to the fact if they turn to smoke and a breeze catch um. That is it. They die. Also from what they explained they don’t have good shelf life. Sucks to be them.

Kinoe was taken on a tour with this nice little girl. Somehow she thinks he is her brother. We don’t really know for sure. At one point she looks at him and then dismiss the idea but at certain points in the anime we see flash backs to them being in tubes. Which could suggest that while being tested on by Orochimaru they did not remember what happened to them. One thing is certain. They are willing to die for Orochimaru. To them he gave them life with the infamous curse mark.

There is a lot to gleam from this episode. The writers are really tieing up all the loose ends for key characters. Building the back story like this can easily spawn many episodes way after Naruto has ended. For example these smoke people.. Where did they come from? Why haven’t they ever been mentioned by any other clan? How did Orochimaru tie into all of this? My guess is that he kidnapped a bunch of people at one time and altered their genes. Then they were told a lie to keep them a secret. Orochimaru sneaky like that. As we all know right now he is with Sasuke right now to bring someone back to life. HE always got a plan. I have come to the idea that he can not die.

This episode is worth a watch. I know I am late with this episode but as life dictates my ISP like man. The choice for internet here in the BVI is like choosing poison. All will kill you but is how. Do you want slow and painful. Try fast but comes and goes. Either way Naruto is getting so good that I get excited when Thursday comes around. My manga friends harass me all the time. I see them looking at me like they want to say to me what is happening. I hope Naruto doesn’t end no time soon. If they do end I hope a spin off from any character would suffice. That is how deep these characters in the narutoverse is.

This episode ended abruptly with Kakashi walking in the hideout. Only God knows who he will kill in that tree trunk. Can’t wait to see how the smoke man dem fight. Would b interesting to see how that goes down. Watch Naruto next Thursday. Thing will be sweet!! So till next time stay frosty!!