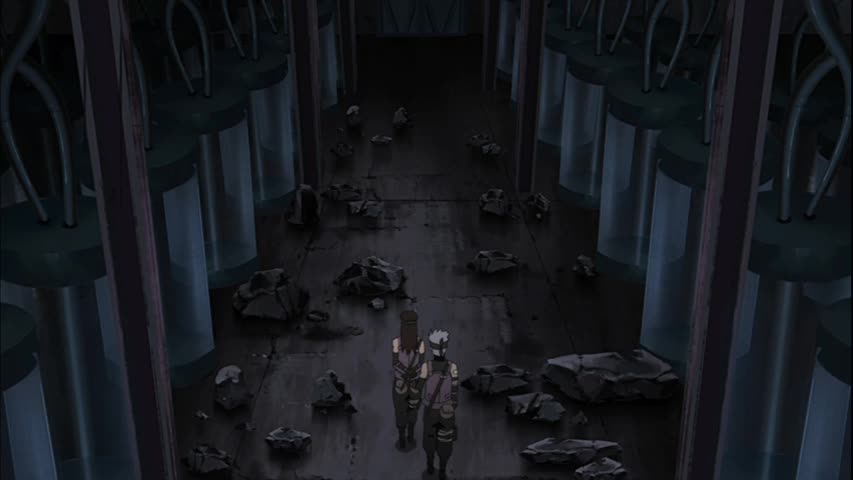 Naruto you sneaky devil you…. Somehow you dragged me into a fluff episode but you well know I love to see the back story of Kakashi. So I welcome it.

This episode picked up right where it left off last week. With Kakashi defeating Kinoe in the secret lab of Orochimaru. You can tell that even though Kinoe tried to kill Kakashi that it would of never happened. Somehow you can tell that Kinoe saw Kakashi as a friend. Not his enemy. Which brought the drama of this fight.

Like a horror movie something came out of the glass tube. Now I know if I was there and knowing the kind of stuff Vibes Cartel cousin was doing in that lab with all dem bleach soap and chemicals. Gone long time. But no. They gone investigate. Kakashi don’t watch horror movies. When ever you in a spooky place and you hear something break. Don’t ever check it out.

What did I tell you! Ting look like Orochimaru had sex with a snake. Naruto Version of Cow Foot Woman! Something wrong with this man. So you done know Kakashi in some hot sauce now. Cause this thing look hungry. He in a glass tube chilling and he fitting to eat him some ninjas. At first Kakashi try to use Chidori but after fighting Kinoe his chakra levels were low. So he had to try his best to fight it off. Because Kinoe was tied up he done get swallowed up by the snake. Yuck… Real talk I would of leave him in there. Only because he got that wood style jutsu. While he in the tummy of the snake he thought back on the time he fought for his life.

Kakashi to the rescue. Again. This boy try to kill this man and he still help him. Talk about a real friend. Good ole Kakashi. I wonder why Obito holding on to that grudge. Man need to just free up. Anyway we Kakashi and Kinoe standing near the carcase of the Snake creature. Suddenly the blood started to emit a poisonous gas. Kinoe got away but Kakashi once again being the super hero warned Kinoe and inhaled the gas. So Kinoe got him out of the room and gave him the anti serum. Whaddya know… He saved his life. How cute. Then the mission Kinoe was sent to do was brought back to his memory. Kakashi knocked out cold. Great opportunity to take his eye. But he didn’t. Instead he chose friendship over the mission. So you know Pimp Daddy Danzo ain’t gonna like that one bit!

Kinoe gonna get it. Danzo look pretty pissed right there. So Kakashi went and told Lord Third of the situation. Now let us get this right. Lord Third is a real politician. This man swoop in at the nick of time and sort out the situation in the nick of time. I doubt that letter he gave that girl had anything to do with the situation. So just for him to get in and pull Kakashi and Kinoe out alive was just real cool. I think Lord Third need to come Tola and run for politics. He would definitely get my vote.

This episode showed the strong bond that Kakashi and Tenzo now have. We understand how those two once formed a bond that stood the test of time. I still don’t understand why Kakashi killed Rin. That part is still a mystery. Probably they will tell us more as the episode goes on. As you can tell they are going through the fluff phase. Lucky for us this fluff isn’t half bad. Bringing us some serious well deserved back stories to some key characters. I hope they don’t send us down a rabbit hole and then pull us out prematurely. Sometimes when you show us the past we might want to stay there. Personally I am enjoying it very much. So till the next episode stay Frosty