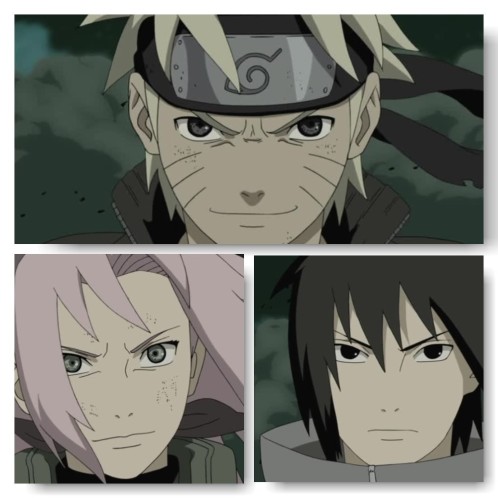 This episode was nostalgia! Point and case! We had all the teams strutting dem stuff! Sadly it took only one dude to stir such emotions. That blasted boy name Sasuke. As much as I don’t like him he did bring back a piece to the puzzle that was missing for a long time.

Like nothing changed between those two. They still see each other as rivals. While the fight was going on both of them was checking out each others strength. As if they know once this war finish they will have to trash it out. I ain’t gonna lie I got my money on Naruto. As soon as daddy give him the other half of the nine tails it gonna be on like donkey kong!

This was comedy. The Ten Tails seem to don’t have a brain. He in a barrier and thought he could blast his way out. Well it back fire and he hit himself. Pure comedy. That is like shooting a gun in a steel room. Just then as the Hokage sent out his clones to allow the allied ninja force to attack the Ten Tails while it is under manners went to Madara to attack him. Now this relationship between Hashirama and Madara is a funny one. It is like they are happy to see each other once again. Just to kill each other….once again. Crazy but interesting. But Madara ain’t fighting no clone. He want the real deal. I ain’t give him no wrong. Why fight a carbon copy when the real thing right there. Ain’t nothing like the real ting baby….

Since the team got back together we have Sakura reminiscing on how weak she is. I really don’t like her. She was a pest back then and still is one. Ok I will give her credit….she strong like the hulk. To boot she look like she done went and theft the same abilities as the 5th Hokage. God rest her soul. I wonder if they will ever show us what happened to them. I mean I guess they are as good as dead. Seeing how we haven’t heard of them after Madara showed up with Obito. So anyway we see how she was a blight to Naruto from day one. How he had to protect her all the time and still won’t give him no nookie. Even after he saved her from that punk name Sasuke that skank still want to be on his dick. I tell ya dem hoes ain’t loyal.

It wasn’t only Team 7 getting on rude! The rest of the other Hidden Leaf Ninjas had to show off also. It was an epic showing. It felt it was atrade show and everyone was showing off their latest tech. From Kiba doing a shadow clone Jutsu and using it to create a three headed wolf! If that will be in the new Naruto Game I done see he will be OP (over powered). Then the one inch beetle punch from Shino was epic. These man does be holding back.

You know I am Team hinata and I had to talk about my girl! She ain’t letting that boobless skank sakura one up her. She had to remind Naruto what time it is. Hopefully that boy will sort out. Until then I rooting for you Hinata!

Everyone was pulling out the stops. Things was looking on the up and up until the momentum started to slow down. They had to formulate a plan. Well just when I thought things couldn’t be more turn up. These man went and went up another notch! TEAM 7 IS REAL TOOL!

These man ain’t playing! This episode had me grinning from ear to ear! Talk about an action packed episode. This one going down as one of my favorites. It wasn’t as epic as the fight with Pain but she up there for best show! If you have been following this series like me it is impossible to say you are not excited to see Team 7 once again. The same rivalry is there between Naruto and Sasuke. One thing I must say it is satisfying to see Naruto happy. All he wanted was his family back. Not to mention his dad is fighting alongside with him. Which in actuality was accomplished because of Sasuke. So thank you Sasuke. I still don’t like you.

Concluding this episode we didn’t get to see Obito and his boyfriend Kakashi. Probably still talking like two parrot. Good for them. We also still don’t know what happened to the Kages. Are they dead? Are they half dead? Well when we get back to them then we will know. I can’t wait for the next episode. I will be in Canada at the Fan Expo. So expect a special treat for that review. So till then stay frosty!