Hey fellow Naruto fans! Sorry for the absence. Was in Canada having a blast. I have a treat just for you guys at the end. Well more of that later. These two episodes had me squealing like a little girl! Lets start at 374!

These man moving like the Sanin back in the day. Watching how everything moving only one can wonder what else could happen. All I know the ten tails bout to get PWND!

Yep the Sanin from back in the day. Tsunade, The real pimp Jiraiya and Vybes Cartel cousin Orochimaru. These man was the bad click in the day.

The plan was simple. Get close enough to cause damage to the Ten tails. Only thing is the millions of henchmen horde protecting him. Yeah no problem at all. Team 7 got this. Easy!

Jutsu so beautiful it brought a tear to Sakura’s eye.

So Just like the real first strike to the Ten Tails was made. One thing I must say about that douchebag Sasuke he complement Naruto very nicely. Somehow watching this episode I felt that Sasuke have (as usual) alternative agendas. Watching the Ten Tails burn must of felt good for the Ninja alliance. Oh did I mention while they watching the barbeque they getting heal up from Sakura. Yeah she turn up now. Can do all kinda ting now. I still don’t like her flat chest ram.

So we have Orochimaru and the gang gone looking for the rest of the Kages. Finally I get to see what really happened to them. Well to my surprise dem ain’t dead. Madara I am disappointed in you. How is it you ain’t finish the job.

This is it. Tsunade was cut in half. Was still able to summon the slug. Save the rest of the Kages while the other half of her body somewhere chilling. How in the world do you stay dead in this anime. It like you have to literally be thrown in a bottomless pit like Jiraiya. Buddy I am speechless. Now these man come reattach her bottom half and Karin let her get bite to bring her back life. What the frak is going on here. Well either way we have Lady Tsunade is back. Once she caught her bearings she realized Orochimaru is not only alive but helping her. Once again he is helping her because of Sasuke. This man like little boys. Real talk. There was a little nice flash back. Worth checking out. But we ain’t got time fi dat. We want to know what a gwan with the ten tails. So lets jump right to episode 375!

Ok I ain’t wasting no time. Right here we see the douchebaggery! This little punk name Sasuke. Naruto tell this man to ease up on the flames and he say no. Let them burn. This little punk! Mehson if I was Naruto I would of use the big yellow hand a park he two big slap. Naruto stronger than you and you giving him lip! Boss you lucky Naruto like man. Would have been on like donkey kong! Just when these man was about to fight it out the ten tails detached the piece that was burning up. Then right then that boy named Sai realized wha going on. He knew that punk can’t be trusted. Even Shikimaru saw through the whole back together again crap.

This blasted girl is a ninja rat! Sai and Shikimaru done see the darkness in Sasuke and she like a real skettle bang buh “He is here and I am Happy” Mehson she beyond saving. I done with this skank.

So we back with these two man. Obito doing all kinds of Genjutsu on Kakashi like that make sense. Yall need just fight and get it over with. So after a nice scene with dem scrapping it out Obito is mortally wounded in the same hole that he used in the Genjutsu. Either way Obito lose and like a punk he run away.

This is when things got real. When Obito plopped on the floor and Madara saw him it was time. Madara decided to do the Rhinne Birth. Finally we see the real reason Madara kept Obito around. Talk about getting the middle finger. Interesting enough the other side of him look like the black zetsu. Call me crazy but I think there is a connection there. Also we see he has no control over his body. So it look like it was a race to kill Obito. 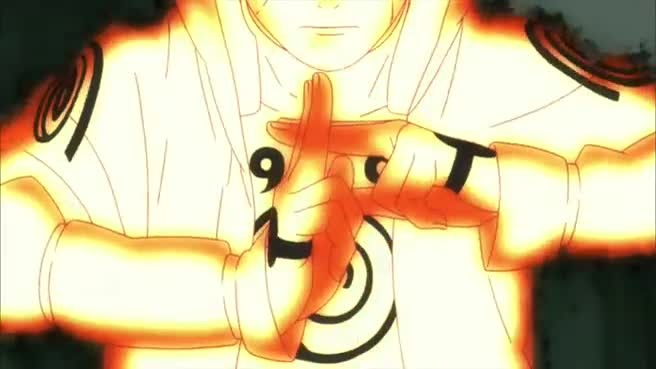 I tell y’all Naruto Father is a beast! That Flying Rajin is real tool. We learned that once marked you marked for life. We got a cool scene where it almost look like Obito had come to his senses. But I was wrong. Just when I thought Obito would just die he pull another trick. Nobody in this anime ever just die…well only the real good ones die.

E.P.I.C I can hear the song in the background… Turn Down for What!

This is wha I talking bout! Obito done level up like Goku and about to lay the smack down on these man. Will the Past Hokages, Present Hokages, Allied Ninja Force and Team 7 can defeat Madara and this hot mess called Obito. This is going to be sweet!!

Now I told you guys I have a treat for y’all. So we call every thursday Naruto Thursday. Where we eat ramen. So usually I buy the store bought ramen. Well while I was in Canada I went down to Chinatown and got me some real authentic ramen. YES That is right!