Fellow Whovians. I know I have been mute about the new Doctor. Peter Capaldi isn’t my favorite Doctor. I guess he needs to warm up to me. So far none of the episodes gave me that Doctor Who feeling. Well all that changed in the last episode Mummy on the Orient Express. 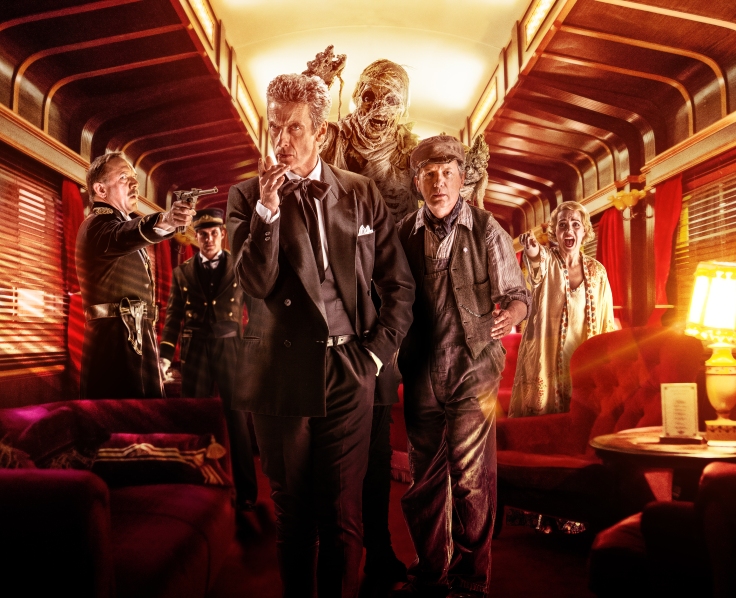 This episode had a sherlock holmes vibe going. Going through the forums and I done see how everyone is loving this new Doctor. Sadly I don’t share the same sentiments. I find him to be boring. I understand after Matt Smith it would be pretty hard to fill that spot. Some say he is a great actor. I find his acting style just to bland. No real personality. I understand this version of the Doctor is more cold and calculated. Which matches his cold demeanor.

The eighth episode did some justice to the character I love to watch every Saturday. We have the classic mummy curse and an unknown villain that lured the Doctor to a trap to solve the mystery of the Mummy. We all know there is an explanation to this phenomenon. Who else better to solve it than the Doctor. Interesting enough his companion Clara Oswald is back. After she said she don’t want to travel with him anymore. Seriously Clara. No one leaves the Doctor.

This episode had everything I loved about the Doctor Who series. Mystery, Wicked looking villains and the Doctor being his crazy self.

The next episode got me a little excited. I will admit that I was losing faith in Doctor Who. The Kill the Moon episode nearly sent me over the edge. I know many other people thought it was pure genius. I thought it was boring and just not as interesting. I fast forward through most of it thinking I might have to find something else to watch. I guess everyone have their flavor of the Doctor they like. This isn’t my flavor right now.

As you can see this episode may prove to be awesome. Usually every Doctor have a mystery that unfolds coming to the end of each series. For example Bad Wolf and The Silence. Right now I only have a slight idea of what is going on this time around. People are showing up in heaven. Also his memory isn’t clear. I guess there is more to this but I am not sure what it is. Will just sit back and enjoy the ride so far.