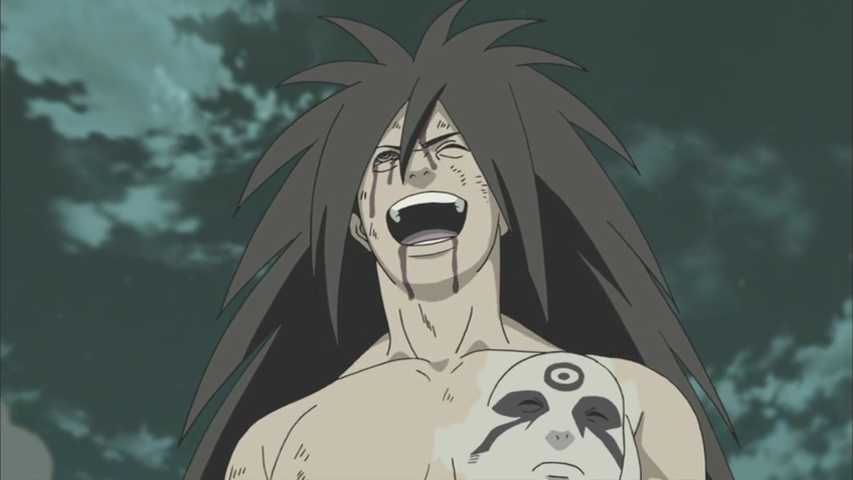 Yeah buddy! I know I have been slacking off. Been partying and getting close with the family. So look comedy when I decided to check up on my favorite anime. FINALLY someone put that brat called Sasuke in he place. But lawdy dem do my boy bad. Let’s dig in!

As you can see the Original Bad Man Madara getting on rude. He alone going up against all the tail beasts. Now don’t get it twisted he ain’t no toy to play with. He seem quite confident on taking these man out. So when the fight start I thought well Madara gonna under estimate his opponents and Naruto will pull a rabbit out of his hat and somehow beat Madara. Well was I wrong.

So after the little throw down ting turn up….fast. When Madara say he gonna do something trust and believe it will be done. Dude moving like the Old Testament. Once he got one of his eyes back look trouble. I don’t know I think he was better off a reanimation. Dude tasted his own blood and just burst out laughing….crazy man he is.

Now what really got me is how these man does just reattach limbs and insert back their eyes like they was lego blocks. No real talk. Dude lopped off white zetsu arm and slide back in his eye. Just so. Now I ain’t no doctor but when they implanted Itachi eyes in Sasuke they had to do surgery and ting. But I guess Madara is a real bad man. Either way it is game over for the Allied Ninja Force. Why? Well easy Madara bout to wrap it up!

Which brings me to the most saddest and yet satisfying episode I have seen in a long time. The title is True End and I didn’t see this coming. On Christmas day while man eating ham and turkey things wasn’t looking good for Naruto and Sasuke. Well lets start with Naruto. As you know Madara put a leash on the tail beasts after making them with an invisible punch. Real talk he just smacked each of them to the ground. Then started to pull them in. As that was happening Gaara was trying his best to keep Madara from pulling them in. Just as Kuruma was being sucked in he told Gaara something important. We done know what it is. Cause once a tail beast get yanked out a Jinchuriki it is lights out. So Naruto life is slowly leaving him. Which don’t sit well with me.

Then Sasuke. Bout time someone sort him out. Now look didn’t I say Madara is a man of his word. Didn’t he tell that lil bwoy to go long and nah come back. He literally tell him he will kill him. Hmph anyway as he was gonna jump on his bid to try to take a cheap shot on Madara the First Hokage wanted to impart something to him. Now I don’t know if he took it or not but we see this boy trying to take advantage of a situation between Madara and Tobirama. Well it didn’t worked as plan and Madara just did want I wanted to see for a minute. Kill he backside. Stab him with his own sword like a side ting who don’t know dem is the side ting. While he was in shock and losing tons of blood Madara just walked off like another day in the office.

So much to get from these episodes. Will Naruto be able to live from having the Nine Tails taken out from him? Will Sasuke finally die? When will I be able to play online on my PS4? Well all these questions got me even more excited! Well sorry for missing Naruto Thursday. CES 2015 is right around the corner and I am getting ready to make that long run to Las Vegas. Don’t worry will keep you guys informed on anything new! So until then stay frosty!!