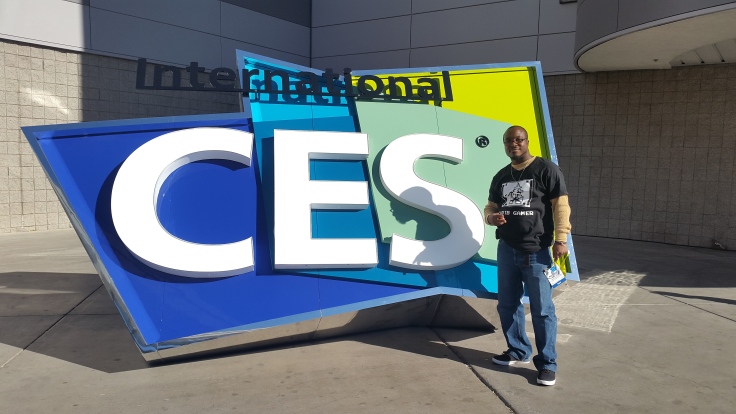 CES 2015 is here and I am in the heart of it. Now this year the theme is I.O.T. Which means Internet of Things. This time around it is all about getting everything connected to the internet. Yes I know it is very doomsday-ish but hey it has to happen sooner or later. Either way I embrace all the cool new tech coming our way.

The boys over at Samsung are pushing the envelope once again with their phones and TV’s. I got an up close touch of the Galaxy Note Edge. Although it feels good in my hand I don’t think it will catch on as well. Many of their newer phones haven’t been sticking well. Then I had a chance to play with the A3 and A5 line of their new phone models. It look more like an iPhone with the all metal body. Don’t worry although you can’t change the battery you can still upgrade the storage size very easily.

Their line of TV’s was very impressive. The new thing now is Curved TV’s. 4K HD will soon be replacing 3D TV’s commercially. I also got a chance to play with the first ever Playstation Now Ready Samsung TV. That is right gamers. You no longer need to have a PS4 or PS3 to play your favorite PSN games. With the new Playstation Now service you can stream your most favorite games from a huge library.

Now as you can see I am totally pwning that dude in street fighter. I did noticed a bit of lag between inputs for each move. I am not to sure if the connection had anything to do with it or the PSN network. Either way it was a seamless experience. You can hook up the PS4 controllers via Bluetooth or USB.

Samsung even going try their hat in the VR department. Yes they had a line of eager participants waiting to try out their new product. I wasn’t to sure of the name. I saw Milk VR but I am not 100% if that is the real name. Well from the looks of it they trying to dip their hand in everything!

The boys over at Sony had a huge presence at CES. They made sure we all know that they are ushering in 2015 guns blazing. To start things off they wowed us with their 8K TV’s. Yes. 8K. Thing was magnificent. It was so clean that even I had a hard time looking away. A midst all the cameras flashing and gasping I was able to get a chance to get real close to the screen.

Sony is doing the Apple thing. Making everything connected. From their phones, game consoles and TV’s everything talks to each other. Which brings me to their new android phone the Z3.

The Z3 is a very light phone. Nothing new here really. We have the Android experience working flawlessly. The newest feature that should be noted is the ability to work with other Sony devices very seamlessly. For example using remote play with your phone to play a select few of PSN games using the PS4 remote. I know it is a gimmick but hey if it can be done more points for them. Also with their line of TV’s Playstation Now is also readily available also.

Google is heavily integrated with their TV’s. Google Cast was being shown using the voice activation feature which in my opinion still won’t work for us with a heavy accent. But hey that’s something that I have to deal with.

Now the game The Order 1886 was available to play. This game play just like Gears of War. Real talk. The graphics looks good. Can’t comment on the quality of the game as yet. Seeing how we was playing an unfinished build of the game. Which had bugs and glitches.

The PS Vita….sigh that poor device. I didn’t see anything that literally wowed me with hat device. They spent more time beefing up the phone features than that little handheld device. In my opinion that will soon see the end.

Also everyone is jumping on the smart watch band wagon. With every Z3 display there was a watch next to it. Now I wasn’t to fond of the watches. They felt cheap. The features was meh….but hey that is the new trend.

These guys had some very innovative ideas. Of course their screens was both impressive and sexy. They had the slimmest borderless bezel I have ever seen. Thing was near invisible to the human eye. I had to get a close pic just to see the border of the screen.

One of the innovative ideas they had was the free form display. Basically the idea behind Minority Report where the display isn’t stationary but follows your eyes. So imagine driving your car and you turn it to the passenger side and it follows your eye movement and readjust to the other side of the car but not in your way but keeps you informed while looking over on the other side. Then the dash board is where your eyes are. I saw it in action and was quite impressed.

There was many other things at CES 2015 that I could rant on about but here are some more pics of all the different things I saw on January 6th 2015. More to come once I find a good wifi signal!!