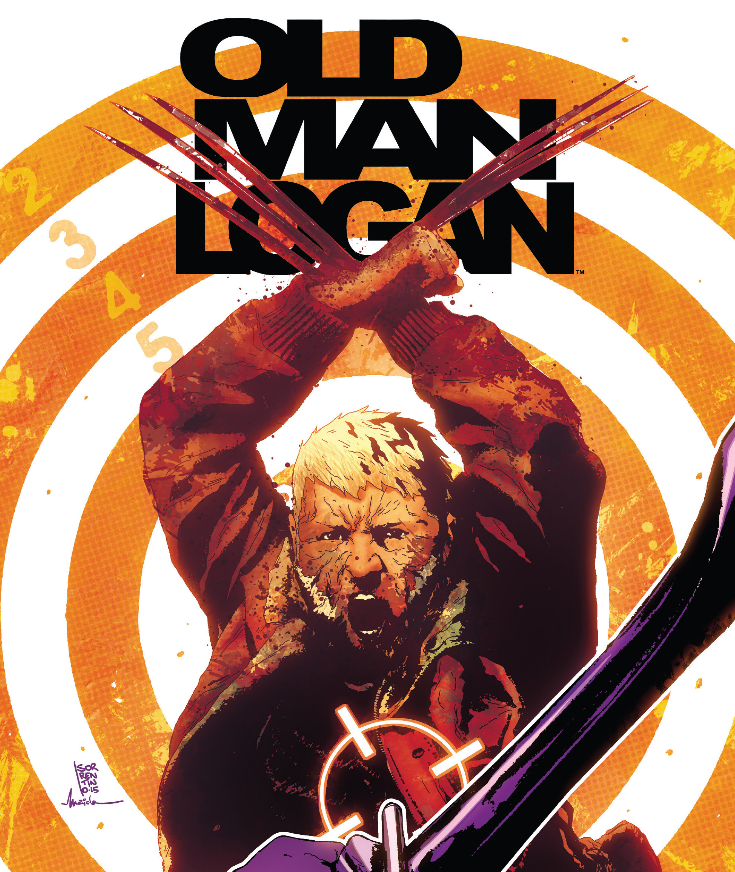 The direction this comic is going seem to be near movie ready. I am so serious. I would definitely pay good money to see this. Years from now a world where villains rule the world and Wolverine is no more. He is known as Old Man Logan. Living that humble life with his family everything is cool. Until the Hulk gang murdered his family. So you know now he ain’t got nothing to lose!

Fast forward and Old Man Logan somehow found himself in the present time before villains ruled the world. Not to mention everyone that see him knows that Wolverine is dead. Although everything seem a bit off he still push forward with his plan to kill those responsible for killing his family and turning the world upside down.

As of now Logan just found out Banner is no more but still didn’t take time to analyze the situation. After fighting a “hulk” he needed to catch himself and heal a bit. I smelled a familiar scent and decided to cool out in Hawkeye’s apartment. Well surprise surprise….he stumbled into Kate Bishops house. She seem to know that Wolverine is dead but after hearing Logan is from the future she took that as a good explanation. Although I really do believe that he isn’t from the future. But I guess we will find that out soon enough.

The idea that he is from another universe seem more plausible. Yet my boy Logan isn’t slowing down for nothing. He is a man on a mission and he won’t be denied blood. Lots of it. So when Kate told him she may know where Mysterio may be he waste no time getting back up for his man hunt. Things turn south fast for Kate. She wasn’t ready! This isn’t the Wolverine she knew from the X-Men days. This is a killer. No hesitation. No talking. Just answers and death. She suddenly realized that she have two choices. To stop Old Man Logan somehow or run away. Well she try to stop him from killing the men that he thought knew where Mysterio was and almost got a blade in her face. So after leaving her behind he went looking for the men. That is when he got interrupted.

AAAAWWWW YEAAHHH!!! It about to go down!!!! This here will be nice if they actually fight! Two old men going at it will be epic! I got my money on Old Man Logan. Easy! Rogers is a boy scout and he won’t be able to do what is needed. April the next issue will be out. The way Hollywood is going this could be the recipe for the next Wolverine movie. One can only hope. If you haven’t picked up this issue as yet get it. Start from the beginning. It is worth the read!