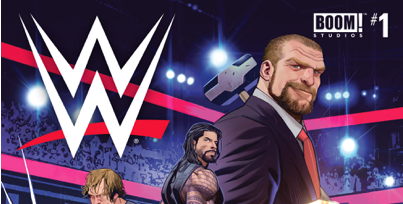 Well this is it. When I thought I have seen everything. The Then Now Forever one shot title picked up steam. So BOOM! studio followed up with WWE #1. It follows Seth Rollins as he climbs his way up to becoming the Champ. It gives us a candid look of the ins and outs of the WWE world. To be honest it it isn’t doing anything new. It is following the WWE universe very carefully. It is even recapping events that already happened. Like the Money in the Bank match. Instead of making the WWE characters into Gladiators ( I am looking at you John Cena and Marvel ) but using their actual Characters. 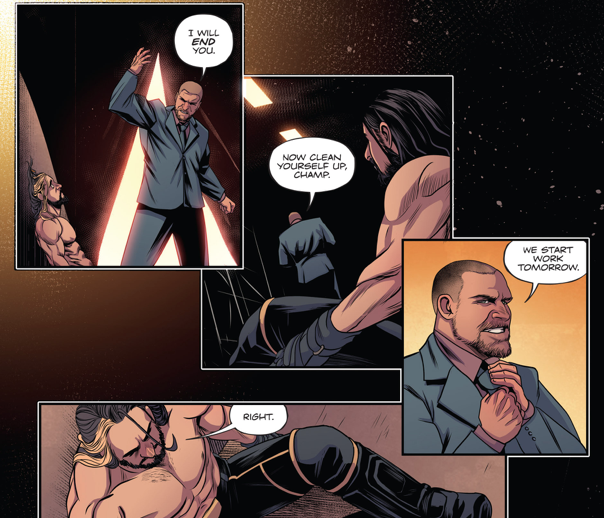 The main thing that stands out about the main story is the more “cartoony” style of Bayliss and Mora’s artwork, which actually helps the story. Too many licensed comics based on live action TV shows/movies rely on photo tracing, which makes the art feels flat and lifeless. Instead of fretting over capturing every face wrinkle and muscle Bayliss and Mora give Ambrose, Reigns, and Rollins more stylized looks that make them feel at home inside the pages of a comic book. They definitely made Seth neck shorter. Dude had a long neck for real.

To be honest this fits the WWE universe just fine. Cause when you see the characters being man handled and thrown out of windows you don’t get the feeling that they will suffer any major injuries. So BOOM! studio did an excellent job protraying each WWE star. With past Superstars like Shawn Micheals and not so old stars Randy Orton make an appearance. So if you are a WWE fan this is a definite read.