I blame Spec Ops the line for such a late review. I been playing that game for the whole weekend. Since Thursday. Epic fail I know. So what is up with the Narutoverse this time around. Well let me see.

We have the old guy who was shot by Wispy Whiskers. He is pretty powerful. Very smart ninja. But not smart enough. Good old Gaara saved the old man at the nick of time with the old switch-a-roo. I wasn’t surprised but what can you expect. So anyway getting to the meat of the matter we have an epic battle between Gaara and the late Mizukage. The late Mizukage used the Infinite Explosion Ninjutsu. You ask what that is. Well it is this little imp that expands with steam then explodes. It is very fast and does massive damage. I know crazy. The old guy explained how it works in perfect anime fashion. How do you defeat something like that. Well Gaara had a few tricks up his sleeves. While they were fighting he figured out a way to slow him down. Then with quick thinking he made a sand clone. When it attacked it the imp got covered with gold dust. Yes sir gold dust. Some of the stuff was laying around and he knew oil, water and gold dust don’t mix. The gold in the dust made him slower. Also combine with the heat he used his Sand trap to hold it. 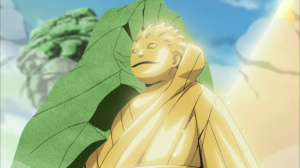 Now I won’t lie the first thing I was doing was breaking off a piece of that imp and cashing out!!! But I guess not in the narutoverse. So anyway he is sealed and we have another surprise. Mu is still alive. Kinda. He split himself in half. Not a clone but he really just split in half. He is running at half his power but nonetheless he is still around. 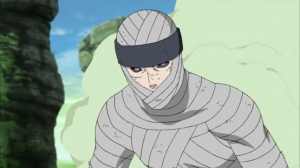 So as we all know Naruto is running over to Sakura. Oh I forgot to tell you guys that the Naruto that you saw fighting with Gaara and the old guy was a clone. How bad is that!!! So anyway we come to the next episode. You know they had to give the other members of the Hidden leaf village a time to shine in the lime light. So as you know this episode 303 was more of a high school reunion. Shikimaru and his team fought against their old enemies. The Sound Ninja Four. To be honest the pad the hell out of that episode. I was not really fond of this episode. Well for the reason these guys been dead for a while and even though their  power have been magnified they still fight like idiots. I mean really do you think these guys gonna be the same level you left them? Not to mention they killed you in the first place.

So basically this episode was the set up for the real plan. What that is you ask. Well those guys really wanted to drag them in hell with them. Yes. Each one of those four ninjas brought them down to hell with them with a transfer jutsu. I guess they are fighting to not stay in hell. Prettey interesting turn of events. I was really hoping in seeing Naruto meet up sakura seeing how the clones are driving everyone insane. No one is sure who is who. So with Shiamaru and the gang in hell fighting for their lives literally and Sakura and the others unable to help injured ninjas things are becoming quite interesting. Hopefully the episode to come won’t be full of talk. You know how they do it. Explain what is going on then fight for 5 minutes and then we have to wait till the next episode to see the results. Well we will see how things pan out. Till Thursday stay frosty!!