This episode….wow. I know sometimes these flashback episodes can be good for information but this one was deep. Now I understand Obito’s hatred.

We begin with Obito talking to two clay type humanoids. Pure comedy. I couldn’t stop smiling on how much these dudes remind me of saturday night live. interesting enough I can see how Tobi came into play. You know Obito before he revealed himself as Madara. Dude was fascinated with poop. 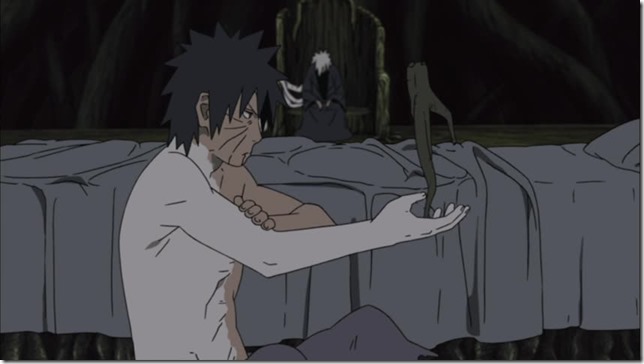 Soon I will be strong enough to leave and be with my girlfriend! EYE OF THE TIGER!

I AM SO GETTING OUT OF THE FRIENDZONE NOW!!

While Obito was in this special cave he concentrated all of his strength to become stronger. Watching him train all I heard in my mind was the song from Rocky, Eye of the Tiger. You know it was like he was focused and ready to go. Ready to go see his friends. Sadly for Obito being in the friend zone was about to get real.

Yo my boy Rin and Kakashi in trouble dread..

One of the clay type clones gave Obito the news about Rin and Kakashi. So you know he sprung into action. As you know he wasn’t strong enough. So one of the clones wrapped himself around him. Like a Guyver suit. This is when things got real….

I will save Rin and Kakashi and finally get me a kiss from Rin!

Big man leh me tell you this. You in the friend zone for life. When you come back then we gonna talk about Tsuki No Me. Also while you out bring me a Red Bull..

Even Madara done know what he is about to see. I have a good idea what he will see but I didn’t know it was going to be so epic. Not only do he hate Kakashi and despise his relationship with Rin being in the friend zone he had a front row seat to her death. Yes Kakashi put his hand right through her. Why I don’t know. All I know Obito didn’t like that one bit.

“LET THE BODIES HIT THE FLOOR”

Dude went ham on these man. Literally saw red. You know when you hear that ominous music things are about to get ugly. FAST. Awakened his sharigan and saw her death as the tipping point. Not only did he hate Kakashi, he hated the world he was living in. So now looking back at what made him go crazy was easy. His imaginary girlfriend died. He blames Kakashi for it. He blames ninjas for it. He blames everyone for it. So his hatred has blossomed. Now it is only a matter of time for us to see how deep the rabbit hole goes. Till then stay frosty!